OMG! I deserve a Nobel Peace Prize… or an Academy Award… or some shit!

Ladies, I have figured out the long-awaited mystery on how to get your man to actually do things around the house… And by that I mean do things your way – as in the right way, obviously!

So forget the whole Men are from Mars, Women are from Venus crap! It’s all about blogging!

You see, at first Big J was not sold on the idea of my starting a blog. Hmmm, I thought… Does he think it will take time away from my Little Orange Crush? Is he worried I’ll be exposing myself to a bunch of online freaks (Yes, that would be you, my friends. YOU!)?

I quickly came to realize it was more of an “it’s not you, it’s me” kind of situation… By blogging, he was more worried that I’d be exposing him!

Here’s how it all went down. Lately I’ve been secretly worrying that I was slowly going blind. Things appeared to be getting darker and darker. My eyes were straining. Only it wasn’t my eyesight, rather every lightbulb in the house needed to be changed.

Now, I’m totally not opposed to doing things myself, but I am vertically challenged (horizontally too, but we’ll save that for another post!). I stand at a proud 5’2… and that’s with heels on! So some of the bulb-changing duties have to fall under Mr 5’11.

Anyways, so I asked, and he changed the bulbs. Great! But the old bulbs were left lying around, and chairs were sitting vacantly in the middle of most rooms. So I ever-so-sweetly (wink, wink) mentioned the whole concept of putting-things-away.

Me: “Hon’. I know chairs have legs, but they can’t walk themselves back to the kitchen table. And do you think the old bulbs lying around will all of a sudden get the bright idea to throw themselves out?”

(I know… sooo corny. And, to make matters worse, I laugh at my own jokes all the time!)

And that’s when it happened… Just as he said it, that he had a ‘Holy Shit’ moment in his brain.

Next thing I know, the bulbs are all cleaned up. Chairs put away.

And so Ladies, that is the power of blogging!

My only concern now is what if he starts his own retalliation blog? Then I might really find myself up shit creek without a paddle. You see, I don’t always like the taste of my own medicine… But until then, let’s get our blog on! 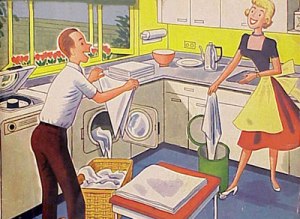 3 thoughts on “Ladies, get blogging…like, NOW! You can thank me later!”