Note: The points and opinions expressed in this post do no necessarily reflect the topics and details that any proud parent (or brother) might want to hear (or envision). Consider this your warning! xoxo

You can imagine my horror when I stepped out of the shower the other day and shockingly thought I’d grown a third nipple… only to realize it was my belly button!

I mean, seriously? I spent 9 months lugging around a watermelon, followed by 17 hours of trying to birth the watermelon, only to have the watermelon cut out of me! And I’ve since managed (God only knows how!) to keep the watermelon alive via my very own built-in watermelons! After all that, the least the Boob Gods’ could have done is gifted me with a nice, solid set of knockers, non?  Apparently not! The price of motherhood is not only sleepless nights, but long, listless girlz too!

I’ve always been… shall we say, well stacked! But this is craziness! I’m like Dolly Parton, only without the waistline!  And all you lucky ABC’s out there are probably asking if I want some fromage with my whine (yes, please!). It’s like the straight hair versus curly hair… one is never happy with what they’ve got. And I want PERKY!

Honestly, is it too much to ask that my girlz be the first to enter a room? Or that I not make a clapping noise when I laugh, and have to pretend to clap like a seal to mask the sound? Or that I not sweep the floors when I walk around? Is this too much to ask for an ole’ Mama? It’s not always about keeping up with the Jones’, People. Bigger is not always better! (Unless of course we’re talking about… OK, I’ll stop now!)

So why the sudden obsession? Well, firstly, go back and read the first sentence of this post! Nuff’ said! And to add damage where damage is done, I’ve just come back from Miami! This is the world capital of  beautiful women (some of whom I’m certain were even men). These girls have got it made – no joke! Perky C-sides by the seaside!

So I’ve decided that  I need to get me a perky set… not to be confused with Percocet! Then again, I’ve heard some side effects of Percocet is loss of appetite! Hmmm… I’ve also heard unusual thoughts and behaviour can occur… So I can’t help but wonder if I’m already taking Percocet! Thoughts? 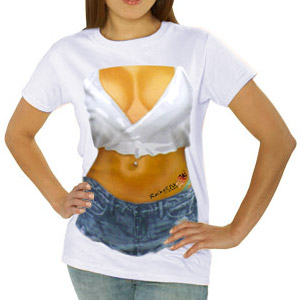 My affordable makeover… Just call me The Illusionist!

And I can already hear all you tree-hugging, bark-eating, yoga-noodling, soy-drinking (probably B-cupping) people telling me to love my God-given body. And I  do!

But really it’s about finding the up side of down (far down)! And that is for now my only boob job will be breastfeeding my Little Orange Crush. And it really doesn’t get much better… rock socks, and all!

OK. Whining over! On to bigger and better bottles.

Now, about that fromage…

PS. T-shirt to appease Big J. Let him think he’s got some “control”…