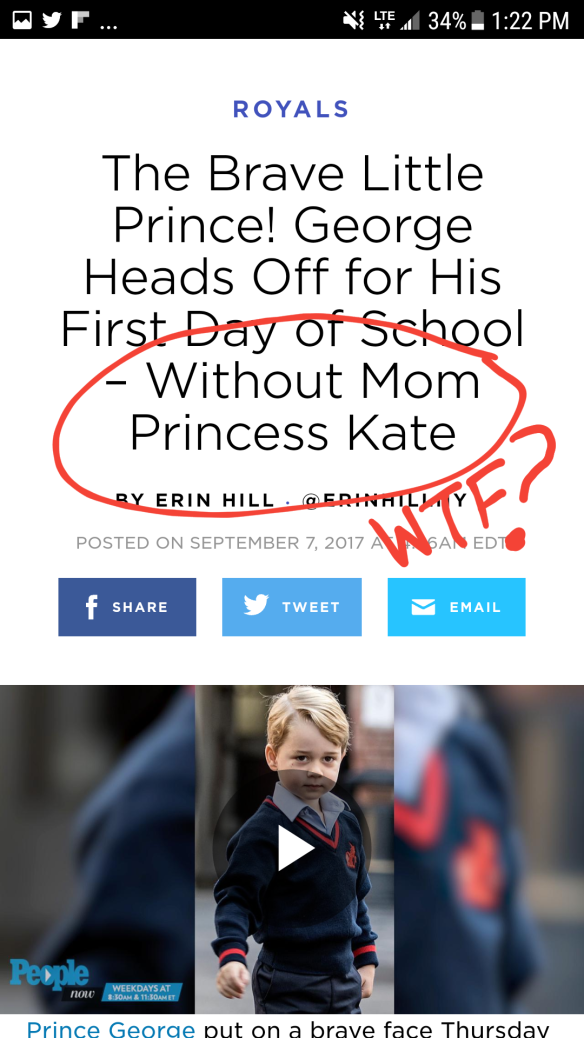 Today was little royal George’s first day at “big boy” school. Now, normally I’d just scroll past this tidbit of news. But it was the way the media portrayed it that got my attention.

That it was the future King of England’s first day at school was secondary… The main story was that drop off happened “without Mom”.

We all know why Mama Cambridge wasn’t there. And I think, as moms, we can all agree that she must be feeling pretty crappy to have missed his first day. But it’s the fact that the media felt the need to make her absence the main story, the headliner!

Had Prince William not been there for school drop off, it’d have subtly been mentioned in print, not the headline. It would be assumed that he was working or had a previous engagement, or was watching sport, or sleeping in, or clipping his royal toenails.

Because no matter the reason, Dads are always excused from the emotional milestone moments of parenting. Moms are unfairly called out for them.

It’s sending two messages here… One, that moms “should” be present for milestone moments because they are the emotional nurturers of the family, and if they aren’t there, they have failed their family. Second, and more importantly, that Dads alone aren’t enough. Undeservedly, that a father can’t provide the love and tenderness like a mother can.

Either way, no good comes from this message.

Today was Prince George’s first day at school. He was safely dropped off by a loving capable parent. Period. End of story.